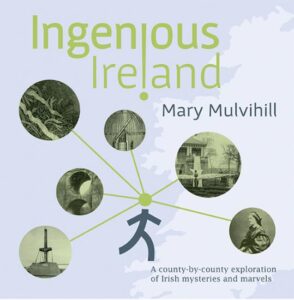 The Mary Mulvihill Association is proud to have secured the republication of Ingenious Ireland, Mary’s extraordinary encyclopaedic work. This was first published in 2002 and was out of print for many years. It is widely recognised as an outstanding piece of individual research, guarding the memory of people and places in Ireland associated with scientific, medical and engineering achievements.

Generous financial support from Dublin City University and Dublin Port enabled the republished version to be sold at a very reasonable price. The public response validated the move completely: 1,000 copies were sold in the first month of sales, up to Christmas 2019, and the next 1,000 sold over the following four months. 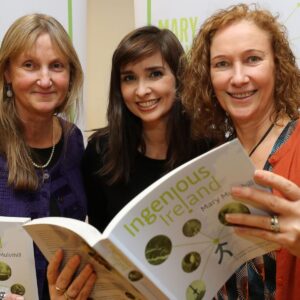 The republished version has a new cover designed by Mary’s niece, Sadhbh Grehan, a foreword by Dame Jocelyn Bell Burnell, a testimonial from Dr Aoibheann Ní Shúilleabháin, and a shortened version of Cormac Sheridan’s commemorative essay about Mary.

In a well-attended event at Epic the Irish Emigration Museum on 21 November 2019, the book was re-launched to a new public. Aoibheann Ní Shúilleabháin formally presented the work, with a warm appreciation of Mary and her work.

There were speeches also from Prof Brian MacCraith DCU President, Prof Margaret Kelleher, chair of the Mary Mulvihill Association, and from Brian Dolan, Mary’s husband, who told us that Mary anticipated giving six months to this project in the late 1990s but the work took six years.

This three-minute video captures the emotion and excitement of the occasion.

Over the weeks after the launch, publisher Four Courts Press ran frequent #factoftheday snippets from Ingenious Ireland on its Twitter account, @FourCourtsPress. Historian Dr Juliana Adelman, writing in the Irish Times, recommended the book as a Christmas gift.

Also in the Irish Times, science and environment editor Kevin O’Sullivan wrote on the book’s personal and wider significance and Paul Clements reviewed it at length on 11 January 2020 (‘A cornucopia of a book that should be savoured slowly’).