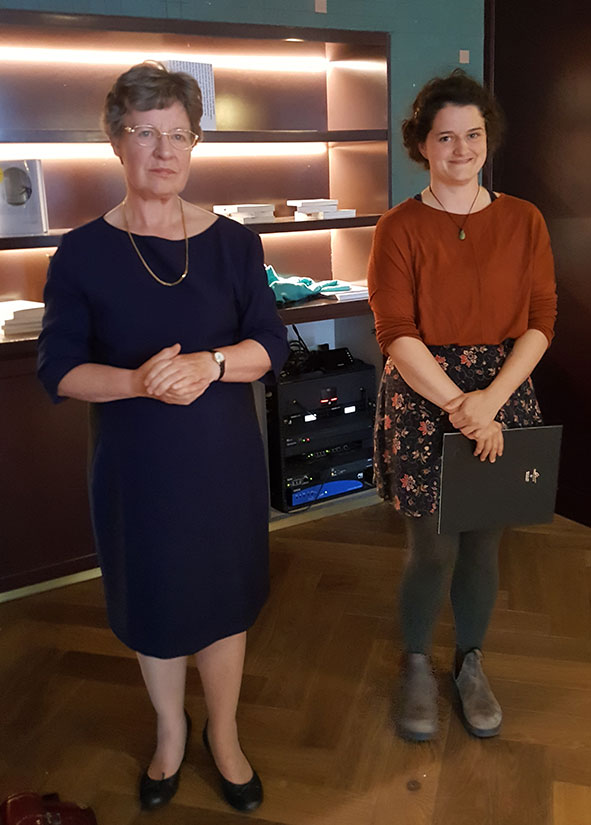 Dame Jocelyn Bell Burnell, one of Ireland’s most respected living scientists, presented the award, which includes a cash prize of €2,000, at a ceremony in Dublin this evening.

This year’s competition invited entries on the theme ‘Science: Whose facts? Whose truth?’ Carbonara’s winning entry explores why “blatant scientific illiteracy” is so rampant at a time of extraordinary scientific achievement. The reductionist nature of scientific inquiry may have contributed to this paradox, she suggests.

By divorcing fact from value, science has allowed itself to become beholden to the whims of political will, funding, publications, and number of citations: a contest for the most charismatic ideas and results,” she writes. “At the same time, a dichotomy exists between the idolization of science as a panacea for all the world’s ills and the deliberate attack on truths that are widely acknowledged within the scientific community”.

Some of the ills that science is expected to solve are the product of science itself, Carbonara writes, while some of the most contested issues are in urgent need of more science, to develop long-term solutions.  If science is to play a role in averting humanity from its present path toward environmental destruction, it must

return to its roots of open-minded questioning, of recognizing the interconnections between all things”.

Abeba Birhane and Siobhán Grayson, PhD students in cognitive science and computer science at University College Dublin (UCD), received a runners-up award for their joint entry, which analyses the assumptions that allow algorithms to pervade our social sphere unchecked.

Data science, like other sciences, is a human endeavour and prone to human biases,” they argue. “Truth in data science is far from fixed, objective and independent of the values and interests of the data scientist herself.”

This is the second year of the Mary Mulvihill Award, set up to honour Mary’s memory and the legacy of her work. “It’s a poignant time for her family and close friends; but it’s also a proud moment, as the award allows us to continue, in a small way, Mary’s role as an educator, mentor and advocate of science,” says Anne Mulvihill, a sister of Mary, and a member of the judging panel. “This year’s winner, Katie Carbonara, has written a very accessible piece on a complex topic, questioning the discipline of science and the work that it does; Mary would have approved,” she said.

‘Science: Whose facts? Whose truth?’ by Katie Carbonara (Winner)

About The Mary Mulvihill Award

The Mary Mulvihill Award is a project of Remembering Mary, an initiative established by the family and friends of the late Mary Mulvihill (1959–2015) to honour her memory and her work in science journalism, science communication and heritage and to promote her legacy. It administers and awards funds to support work that commemorates her work and its significance.

The judges for the Mary Mulvihill Award 2018 were:

A native of New Hampshire, USA, Katie Carbonara has followed her interests in sustainable agriculture, indigenous knowledge, and conservation biology from Alaska to New Zealand, with stints in Hawaii and in her home state along the way. She is currently an MSc student on Trinity College Dublin’s conservation and biodiversity programme, having previously completed a BSc in environmental conservation and sustainability at the University of New Hampshire.

Siobhán Grayson is currently pursuing a PhD in computer science at the Insight Centre for Data Analytics at University College Dublin, having previously completed an M.Sc in computer science at UCD and a BA in Physics at TCD. Through her PhD studies, she is collaborating with the avionics firm Curtiss-Wright on the implementation of a novel real-time safety system to detect and classify anomalies and faults that can occur within complex aviation systems. She is also a part of the ‘Nation, Genre, and Gender’ project, an interdisciplinary collaboration between the Insight Centre and the Humanities Institute at UCD, which is developing new perspectives on a range of 19th Century Irish and British novels, using quantitative and qualitative methodologies. This summer she will join the Berkman Klein Center for Internet and Society at Harvard University where she will contribute to projects on media manipulation and on harmful speech online. Siobhán won the Student of the Year award at the 2017 Data Science Awards.

Originally from Ethiopia, Abeba Birhane is currently pursuing a PhD in cognitive science at UCD, having previously completed an MSc in the subject at the same college, as well as a BA in philosophy and a BSc in psychology at the The Open University. She is a contributor to Aeon Magazine and blogs about cognitive science, philosophy, the ethics of artificial intelligence, and feminism at abebabirhane.wordpress.com.

Jocelyn Bell Burnell, from Lurgan, County Armagh, made what has been called the most important discovery in astrophysics in the 20th century, when she discovered pulsars as a PhD student at Cambridge University. These dense, rotating stars emit electromagnetic radiation at precise time intervals. The discovery won her supervisor Anthony Hewish a Nobel Prize in 1974. Now visiting professor of physics at Oxford University, Bell Burnell is a passionate advocate for women in science. She has served as president of both the Royal Astronomical Society and the Institute of Physics.