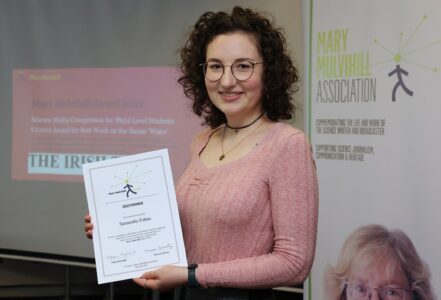 DUBLIN, 1 June, 2022—UCD student Samantha Tobias is the 2022 winner of the €2000 Mary Mulvihill Award, the science media competition for third-level students that commemorates the legacy of science journalist and author Mary Mulvihill (1959–2015).

Now in its sixth year, this year’s competition invited entries on the theme of ‘Water’, that simple arrangement of two hydrogen atoms and one oxygen atom – H2O – which has such profound importance for the life of this planet. Entrants were encouraged to address the topic in scientific, environmental, imaginative or other terms. Students from ten colleges around Ireland submitted entries.

Samantha, a student on UCD’s master’s program in World Heritage Management and Conservation, won the top prize for her entry, an illustrated essay entitled “Vegaøyan: Impact and Management of Sea Level Rise and Flooding on World Heritage Sites”.

It is a rich and extraordinarily thorough analysis of the implications of rising sea levels for the Vegaøyan (or Vega) archipelago off the west coast of Norway. A UNESCO World Heritage site, the Vegaøyan is a precious cultural landscape and seascape, comprising thousands of islands, islets and reefs. The region has a continuous history of human habitation for over 10,000 years. Its inhabitants combine fishing, farming and the highly distinctive practice of harvesting the down of eider ducks, for which they build special nesting houses.

Rising sea levels and associated coastal flooding threaten to upset the area’s delicate balance and undermine the viability of its 222 bird species and its rich marine biodiversity. “The negative impact of climate change on the ecosystem will start a cumulative chain reaction: A decrease in eider duck populations will threaten the traditions around the down collection, and the changing ecosystem will limit fishing and farming opportunities,” Tobias writes.

Maintaining the area’s kelp forests can help to mitigate some of the impacts, just as mangrove forests have been used in tropical countries. The leafy biomass can absorb some of the energy of oncoming waves, while the kelp roots help to stabilise the sediment on the sea floor. Preserving the kelp ecosystem should be a priority, therefore. But local input will be key to any successful mitigation strategy.

“Samantha’s entry was such a strong piece of work,” says Fiona Regan, professor in chemistry and director of the DCU Water Institute at Dublin City University, who presented the award. “It was thorough, technically sound and displayed a nice grasp of several disciplines.”
Samantha is the second student on UCD’s World Heritage Management and Conservation course to win the award, following the inaugural winner Irene Fogarty, in 2017.

Another UCD student, Rodger Clery, who is studying science, received the judges’ €500 highly commended award for a short animated film, ‘A Beginner’s Guide to Water’, which deftly explains everything you need to know about water from the atomic level to the planetary scale.

“In terms of explaining the hydrological cycle, Rodger’s entry is as good as it gets,” said Nigel Monaghan, Keeper of the National Museum of Ireland, Natural History, and a member of the judging panel.

The Robert Boyle Summer School, which runs in Lismore, County Waterford from 23–26 June, has very generously offered a place to this year’s winner, Samantha Tobias. It has also extended this offer to the 2020 and 2021 winners, James Hayes, of NUI Galway, and Eoin Murphy, of DCU. 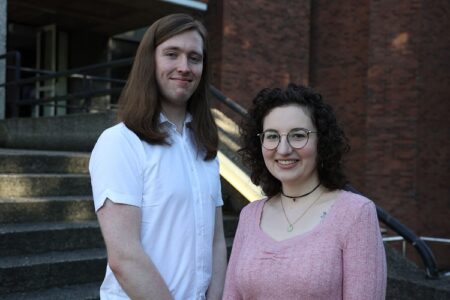 The prize-giving ceremony, the first the association has been able to hold since 2019, was hosted by the Dublin Institute for Advanced Studies. The event also included the first annual Science@Culture talk, reviving a name that Mary had introduced in 1995 for an email bulletin (later a blog) that kept readers abreast of a vast range of scientific activities and events.

Academic and science communicator Brian Trench, who gave the talk, discussed aspects of science’s situation in culture, including the metaphors used in scientific language, the attention given by artists and writers to scientific ideas and the presence of science and scientists in popular and everyday culture.

The judges for the Mary Mulvihill Award 2022 were:

Samantha Tobias – Bio
A native of Munich, Germany, Samantha Tobias will complete a master’s degree in World Heritage Management & Conservation at UCD later this year, after which she aims to undertake a PhD in the same discipline. Her ambition is to conduct further research on Vegaøyan’s human culture and its complex ecosystem and to study possible mitigation strategies that could minimize the damage to both caused by rising sea levels. Samantha has had a highly interdisciplinary educational career. After completing medical studies at Ludwig Maximilian University (LMU) in Munich, she did a degree in philosophy at LMU, which included a year at Kings College London. A stint working in archaeology at a number of neolithic, Roman and medieval sites across Germany awakened her love for heritage and conservation and brought her to Dublin.

Rodger Clery – Bio
A native of Kilmallock, County Limerick, Rodger Clery is a first-year science student in UCD and a recent graduate of Scoil Pól in Kilfinnane. In addition to enjoying science and science communication, Rodger is also interested in art and creativity and in recent years has started to produce paintings and murals. In terms of science, statistics is a particular passion. He is fascinated by the power of statistics – how simple statistical operations can yield novel insights into a given subject. His highly commended entry on water is his first film.

The Mary Mulvihill Award is a project of The Mary Mulvihill Association, an initiative established by the family and friends of the late Mary Mulvihill (1959–2015) to honour her memory and her work in science journalism, science communication and heritage, and to promote her legacy. It administers and awards funds to support work that commemorates her work and its significance.